Start a Wiki
Freddy Frost is a soul that absorbed ice around him to become an Ice Elemental. He was formerly a human snowboarder when he was alive. 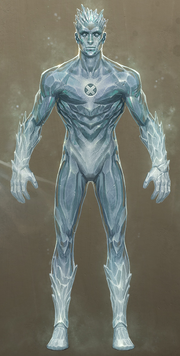 Freddy has a shiny appearance being made out of ice. His body is tall, slim, and very muscular and has the many bumps, ridges, and edges on it. On the middle of his chest is an "X" symbol which signifies the slang term for "Extreme", which is "Xtreme". This makes sense considering his love for extreme things. His hair are sharp ice shards that stick up and curve back. On his forearms and legs he also has sharp ice shards that increase the durability and strength in that area.

Freddy has a "live life" attitude and likes to live his life to the fullest. This type of personality gives him the will to do extreme things such as snowboarding in a cold place like Korino Shi Heights. He is really nice and likes to make friends, being willing to help anyone, even if just now meeting them.

Retrieved from "https://erol.fandom.com/wiki/Freddy_Frost?oldid=4810"
Community content is available under CC-BY-SA unless otherwise noted.