Kaiju is the Queen of the Ogres, being a Philosopher rank in the Alchemist class. 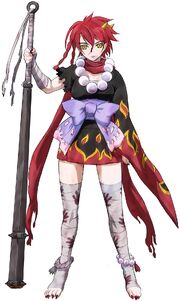 Kaiju has bright maroon colored hair that matches her scarf and the flames on her garb. She has yellow horns, being the same color as the yellow in her eyes, and unlike most Ogres, she looks more human like. Her claws are maroon and show on both her feet and her hands, since she does not wear shoes. Wrapped around her arm and her leg are cloth wraps, with the ones on her leg having red hand prints on it being an alchemy sign. Both of her ankles have something on them with one of her ankles have a small rope tied around it and the other having sacred spheres around it, being the same as the spheres on her neck. Also around her neck is a maroon scarf that hangs on both sides of her body. Her garb is black with flame designs being tied with a lavender bow that has pink cherry blossoms on the end of it.

Kaiju is a very calm, being uncommon throughout the race of Ogres. Although being calm, she is not a pushover and will be fierce when the time is needed. Even in her fierce state she still has a side for understanding and compromise, and is willing to negotiate things with her enemy. This negotiating also goes along with her showing mercy, because she will show mercy if the enemy is convincing enough.

Retrieved from "https://erol.fandom.com/wiki/Kaiju?oldid=4794"
Community content is available under CC-BY-SA unless otherwise noted.