Welkin Gunther lands in Erol Asylum. Where he lands right in front of a maniac crime boss and his goons, as if they were expecting him. 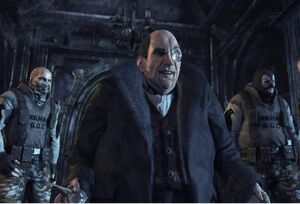 "Welcome to the Asylum," the Crime Boss said. "How about we show you around?" The Crime boss now had an evil grin.

"I..Sure.." Welkin slowly lowered his gun, he preferred diplomacy, to outright killing everyone in sight.

"He's not very bright is he boss," said one of the henchmen. "It appears not," the Crime Boss said with a smile. "How about we make you a deal. We'll give you a tour of the Asylum, won't kill you, and give you a new gun, if you help us escape. Do you accept?"

Welkin quickly realized that diplomacy wouldn't work, without further killing. And promptly grabbed a grenade that was inside his pocket, but didn't pull it out,taking off the safety cap as if he was flipping a coin with his thumb, before pulling it out by the detonation cord and flinging it at the crime boss, and quickly running for some form of cover.

The crime boss quickly put up his umbrella which blocked the power of the explosion from the grenade. "Wrong decision, officer," said the crime boss with an evil laugh. Smoke was everywhere from the grenade and the henchmen began turning their heat vision on. It was best for Welkin not to face them up close.

Welkin quickly begins slowly backing away, while at the same time firing shots at the henchmen, and occasionally ducking, slowly going around the asylum, if he was lucky, there was a back-door, which could potentially allow him to flank the crime boss and his men.

To Welkin's luck there was a back door which led out to the rest of the city. In his view there were goons everywhere. Clearly he could see the officer's made a mistake and his level was not high enough for this mission. Luckily the officers knew and already had a helicopter hovering above Welkin, with a ladder hanging down for him.

Welkin quickly hopped, grabbing up onto the ladder and began climbing, throwing a few grenades at the goons as he climbed.

The grenades killed the goons and scared the rest of them putting them in check.

The warp device on the helicopter had been fixed and it immediately arrived back to Newb York where they let Welkin down safely. "Yeah that was the wrong mission," said the officer. "My mistake."

Retrieved from "https://erol.fandom.com/wiki/Role_Play:_Erol_Asylum?oldid=4303"
Community content is available under CC-BY-SA unless otherwise noted.