Jason Gavin suddenly woke up and as he woke up, he realized it was night time and didn't know where he was. He saw a hooded man in front of him that was looking at him, and this made him even more confused because the last thing he remembers is walking. 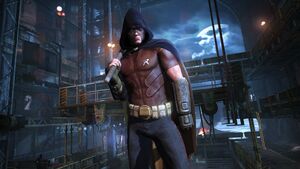 "So you're finally here," says the man.

"I'm a high ranking member of the Ninjas," says the man. "My name is Ryan Strange, and I am here to inform you that you are now officially in the Ninja class."

"Well Ryan, you certainly are...STRANGE. Ha ha see what I did there?" Jason asks.

"Ha, ha, ha, very fun," says Ryan in a sarcastic voice. "Show me what you got, by taking out these guys..." Ryan points to the men below him who are completely unaware that he is here. "This is your first mission."

Jason uses his webs to slowly come down behind them. He then wraps all of them in a web cocoon and puts it on the ceiling.

"You are a very good ninja," says Ryan. "You were stealthy, and didn't even have to use brute force. Take them away." Just as Ryan says that, shadows appear out of no where, and the web cocoons disappear in an instant.

"Ninjas are taking the enemy away," says Ryan. "Anyway, I have a mission for you. If you don't already know; the first rank of ninja is a spy. So I have a job that requires spying. You up for it?"

"Alright," says Ryan. "We'll take a helicopter to the destination of the mission." Ryan walks towards the water.

"Hey, Mr. Strange" Jason yells. "I don't need to get into the Helicopter."

"What do you mean?" asks Ryan in confusion.

"I have webs, Ryan" Jason says "I can swing onto anything I want".

"I don't need to ride in on the helicopter, I can swing off of it" Jason says. "Now lets go, Mr. Strange."

Retrieved from "https://erol.fandom.com/wiki/Role_Play:_Erol_City?oldid=5224"
Community content is available under CC-BY-SA unless otherwise noted.