After a week of travelling through the portal, Zerxes lands in Greatroplis under a bridge by a train station with many people walking around basically being a crowded area.

"Where am I, and what is this all about?" Zerxes says as he wonders around from under the bride. He is crowded by people, only his bow is visible as it sticks out like red and blue as he wonders.

Zerxes bumps into an old lady while talking. "You're in Greatroplis, where else would you be?" she asks with a smile.

"I apologize, ma'am. I'm not acustom to the city life. I'm an archer... So, this is Greatroplis? Seems very busy" Zerxes says curiously.

"I understand," says the lady. "With you being an archer, you better watch out. For the Greatroplis Gang will steal your things. But being an archer you should be able to take them."

"Gang? So, this place needs help? A hero?" Zerxes asks.

"Yeah if only we could find a hero," says the lady looking down in disappointment. "The problem is, is that the gang is also the police force. They run the law and they break the law."

"I see... So, where are they usually residing?" Zerxes asks in concern, as he is lightly tapping his bow.

"The police force here is very shady, so no one knows where their base is," says the lady. "They just appear out of nowhere. I don't know where they could be how they could just appear at any place at anytime..."

"Perhaps I can attempt to seek them out, eh? Sounds good, I can handle it," Zerxes says.

"Be safe," says the lady. "Take this. It will teleport you to my house if things go wrong." The lady gives Zerxes five Teleportation Scrolls that teleport the user when opened.

"Nice meeting you," says the lady with a smile.

"Thank you, I shall attempt to purify this city for the good." Zerxes says thankfully, as he begins to walk off. He gets further into the city and is looking around.

As Zerxes is walking he faces thirst, hunger, and tiredness, now needing something to fulfill his those needs or he will not be able to search for the gang at full strength, nonetheless fight.

He then looks around for a cafe or diner, as he goes in his pocket for money.

Zerxes now finds a tea shop as he is walking.

He walks into the tea shop, and asks for a cup and something to eat.

The lady gives Zerxes a menu.

Zerxes receives a box of Moon Cake, and receives a cup of the Tree Bark Mud Tea.

Zerxes sits, and drinks and eats.

As Zerxes is drinking he feels his body suddenly warm up and his injuries feel better. He feels such a soothing sensation as his body turns relaxed.

When he eats the Moon Cake, the flavor travels throughout his whole mouth giving him a wonderful sensation, and making him feel amazing. His Mana now starts to regenerate completely as he glows with golden energy from the Moon Cake.

Now Zerxes realizes why the two items costs so much.

Zerxes finishes up, and stands. He begins to swiftly run through the city, parkoring over trash cans, through alleys and such as he searches. He has gained a rush due to being a full force.

Zerxes still has no luck finding any of the Greatroplis Gang.

Zerxes stops. He then yells. "HEY, GREATROPOLIS GANG! GET OUT HERE!"

The area Zerxes is in begins to clear. "Oh no this man is crazy!" he hears.

A few seconds later, members of the Greatroplis Gang appear from under the ground all staring at Zerxes. "You have a lot of nerve coming in our city, yelling that," says one of the gang members.

"I'm here to join your organization, if you know what I mean.." Zerxes says calmly.

"Too bad the organization only accepts ninjas," says the member with a serious face. "This shows you are new to the city, so you wouldn't be able to join anyway."

"Hmm you might be worthy, seeing as no one suspects an archer to be on the Greatroplis gang," says one of the members reconsidering.

"Well just steal shit and enforce the law, while not following the law, because that's how we do," says the member. "If you slip up you'll get beat brutally plain and simple."

"I'm ready, I could use some bucks." Zerxes says drawing his bow.

"No bucks until you show us you are gang material," says the member.

Zerxes fires a meteor shot right into the face of the talking member then shoots at the others.

Zerxes all of a sudden feels the pressure of their Mana flow out as they are now shown to be able to manipulate the earth below them to block the meteor shot with ease and put out the fire. The other members create earth pillars to block the other shots.

"Such an idiotic move," says one of the members.

Zerxes uses one of the scrolls, transporting himself to the lady's home.

"I failed!" He exclaims.

The lady sips her tea. "Did you come face to face with them?" the lady asks.

"I was close, they were asking for too much. I panicked and attacked..." Zerxes replies.

"Now they know your face," the woman says calmly. "You must leave the city quick! Now they are after you! Here is a scroll to teleport outside of the gates!"

"It was nice meeting you," says the lady.

He uses the scroll to leave then begins walking down a trail, unknowing of his destination.

As Zerxes walks down the trail he says a gate to a kingdom that is in a clay made wall. 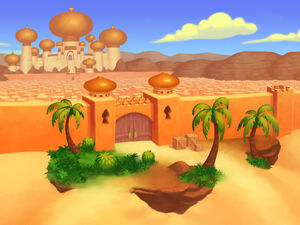 "Hm?" Zerxes walks to the gates, seeking entry obviously. "Hello?" He yells up.

When Zerxes pushes the giant door open, he enters Maginoplis.

Retrieved from "https://erol.fandom.com/wiki/Role_Play:_Greatroplis?oldid=4905"
Community content is available under CC-BY-SA unless otherwise noted.