Zerxes arrives and as he arrives, he sees that he's in the cave. 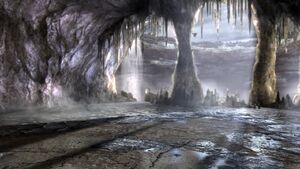 Zerxes walks deeper into the cave, he walks lightly and breathes softly.. He has his bow drawn and ready for combat.

As Zerxes tries to walk deeper into the cave, he notices he's on a platform floating on water and that if he walks any further, he will fall in. As he stands there, he hears a growl behind him.

Zerxes turns, he instantly loads 2 arrows into the bow at the same time and aims it behind him.

As Zerxes turns he sees a Lizardman, with a gate that wasn't there before. 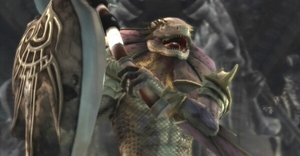 Zerxes has the arrows loaded but puts the bow down a bit, "I. Come. In. Peace." Zerxes says slowly, trying to get in a peaceful posture.

"I come for Reptilia," says the Lizardman as he slowly starts walking closer to Zerxes.

"Reptilia, is this your leader? Take me to this.... Reptillia, if you may.." Zerxes demands, but doesn't show that he is demanding.

"Reptilia is our god, and you will be sacrificed to her," says the Lizardman. The Lizardman charges at Zerxes with his head forward.

Zerxes fires then barrel rolls out of the way. He then stands and fires more.

Zerxes completely misses the Lizardman, as he had his bow turned backwards, but since he barrel rolled, he managed to dodge. The Lizardman's speed causes him to fall in the water, so Zerxes has time to fix his aiming.

Zerxes begins firing as the Lizardman is in the water.

Zerxes fails again, as his bow is still aimed behind him. The Lizardman now begins climbing back to the surface.

Zerxes stabs himself with 5 arrows and bleeds out in seconds.

Retrieved from "https://erol.fandom.com/wiki/Role_Play:_Lizard_Cave?oldid=5216"
Community content is available under CC-BY-SA unless otherwise noted.