After a week of travelling through the portal, Arris Taylor lands on a wooden platform connected to a tree. The place he is in is cold and empty with no one around.

"What are you doing out here?!" a man whispers loudly from a window in the tree. "There's a werewolf roaming around! You should hide!"

"Umm Who's there" Arris asks.

"Over here," the man whispers.

Arris walks to where the voice is coming from.

As Arris walks to the voice he suddenly gets pulled into a window.

"Hello, I have no time to tell my name," says the man. "We must crouch so the werewolf won't see us!"

"Umm I can handle some werewolf.." Arris said to the man

Arris sees the werewolf out the window and he can feel the powerful dark presence. It is his choice to face it or not.

Arris steps out infront of the werewolf "Yeah...Bring it on!" Arris exclaims.

The werewolf leaps off of the tree charging at Arris with his right claw towards him. 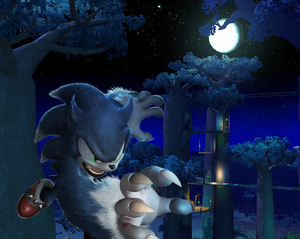 Arris grabs the Werewolf's claw and tries to swing it over him.

The werewolf gets grip of Arris's hand and overpowers Arris reversing the swing, now making it a more advanced swing by stretching his arm out to great lengths and slamming Arris on the ground repeatedly.

Arris squeezes the Werewolf's hand and tries to overpower it.

The werewolf releases his dark explosive Mana from his hand sending Arris back flying into a tree.

Arris doesn't even have grip of the Werewolf's arm. The werewolf swings from each tree and spins into a ball crashing down on Arris.

Arris dodges and sprints away from the werewolf. "Hmmm" Arris runs back and jumps up coming back down with a shockwave.

As Arris tries to imagine that combo in his head, the werewolf's attacking crashing down is too fast to escape from and Arris is crushed into the ground greatly wounded.

The werewolf now picks up Arris and slams on the ground knocking him out.

The werewolf now proceeds to take Arris to the Temple of Unleash, where Arris now wakes up but for some reason is unable to fight.

Arris' eyes snap open "Ahhh Where Am I?"

"You are in the Temple of Unleash," says the werewolf. "I am Mach, and your inner dark power will be unleashed by the power of Dark Mana every night, when the moon shines bright. A lot of people mistaken me for a werewolf but I am not even a wolf, this is just my unleashed state. You will soon have one too!"

Arris begins to be engulfed by dark power as his body starts to change at fast rates. The dark power stands Arris up as even his suit is changed and his cape is restored.

Arris looks at himself "WHAT THE HELL HAVE YOU DONE TO ME?!?!" Arris realizes his voice is deep and has grown more of a Demonic tone.

"I have unleashed your dark power," says Mach. "We will discover the source of the dark power by unleashing more people!"

Arris picks Mach up by the collar. "Change me back NOW!" Arris screams at him.

Arris puts Mach down. "So...Have I gained anything useful from this?" he asks.

"You gained the power to use inner darkness and unleash it to make you more powerful," says Mach.

Arris looks at Mach "What does my Inner darkness actually do?"

"It unleashes your dark power to make you more powerful," says Mach frowning. "Now stop asking me questions! Our first location we will hit for unleashing people is Maginoplis. You in or not?"

Arris looks at Mach with a death stare "Even though I have evil in me I am still a force for good!"

"You aren't very bright are you," growls Mach. "I'm not evil," he says as he face palms.

"You don't understand what I mean...I'm not gonna unleash an attack on people who don't deserve it" Arris says to Mach.

"It will help us find the source of this evil, who is turning us into this dark form," says Mach. "Eventually if we don't find the source our unleashed side will take over. Do you want that?"

Follow me then, Mach says he walks through the exit of the temple.

As Arris follows, Mach and him arrive on a grass field by a windmill where they see an anthropomorphic fox with two tails. 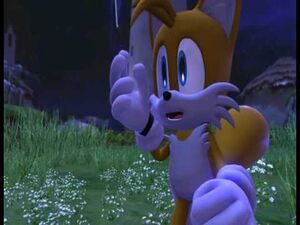 "This is my friend, Foxes," says Mach. "He will be our transportation to Maginoplis."

Arris still has the same look. "Foxes? He should have a different name like...Tails or Miles Prower or something," says Arris.

"You're stupid and rude," says Mach. "Lets get into the space ship, idiot." Mach walks towards the ship.

Arris looks at Mach "Oh hold the hell on what did I do?"

"I wasn't trying to be rude, asshole" Arris says.

"Whatever," says Mach, as he begins walking towards the direction of the ship.

Arris walks towards the ship.

There is no seat near foxes, as only the pilot seat is in the front. "Gotta move to the back, bud," says Foxes.

Arris moves and takes a seat in the back.

"Lets go!" yells Foxes as he starts to ship and begins to fly in the air, heading towards Maginoplis. "So how'd you get here man?"

"I stepped in a Portal and landed here.." Arris says.

"Ah I see," says Foxes. "Anything you want to talk about as we are flying?"

Retrieved from "https://erol.fandom.com/wiki/Role_Play:_Mufasa?oldid=5002"
Community content is available under CC-BY-SA unless otherwise noted.