William had been walking to the ship, since those were his directions after graduating out of the Academy of Vikings. There he saw a man in front of the ship. 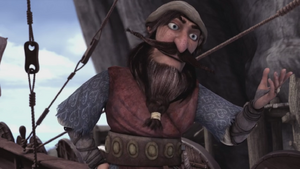 "Hello there son!" exclaims the man. "Are yee a viking?!"

"No I am a knight come to raid your ship," William says sarcastically. "Of course I am a Bloody Viking."

"You dare disrespect me!" yells the man. "I am Roxar Broomsley! Now get on the ship before I send you to swim with the fishies!"

William walks on ship towards the cabins.

William walks in and sees all the cots are full so he goes to the biggest one nearby and empties all the stuff on it and puts his stuff there.

William sees a lot of fellow vikings and suddenly feels the ship beginning to move. Now his journey as a viking, has begun!

"Well time to pick a place to sleep hmmm they all seem full" William says worried.

William sees an empty bed in the back of the cabin.

"Back of the cabin is the worst bit it sways so much but still better then nothing," William says annoyed.

The bed is all dusty with spiders.

"GREAT just what I needed," says William. "Oh well." William Grabs the spiders and puts them on ground.

Now all William's bed has is the dust.

"How can a ship that lives on the sea get so dusty it amazes me" William says. William brushes of the dust with a random shirt lying around.

Just as William brushes off the dust, he feels something hard under his mattress.

"Hmm what is that"". William slowly lifts up mattress.

Just as William lifts up the mattress, he finds 360 gold! Will he pick it up?

"How odd oh well free gold". William picks up gold and puts in in bag.

Just as William puts the gold in the bag, he feels the ship stop. The captain of the ship, Roxar, walks in the cabin and says "Ready for yar first mission?!"

The other crew mates say yes.

The other vikings also walk outside.

"Alright the reason the ship has stopped is because of the mission," says Roxar. "Your mission is to jump and the ocean, and get yourself some dinner. By the way, there aren't any little fishies because the sharks ate them! So you have to fight a shark, while swimming! Good luck!"

"WHAT your kidding me damn it" Says William. William jumps in sea with a knife in his mouth.

Just as William jumps in the sea, he sees a shark move their head above the water looking at him. 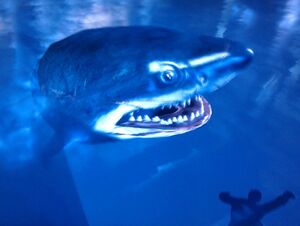 "Ok Will you can do this" William thinks. William holds knife in hand ready for shark.

The shark still hops up diving down at William with his mouth wide open ready to bite.

"COME ONN" William screams. William moves to the right of the shark and stabs it in the left eye.

The shark is now blind, but since William is close, the shark moves his body sending William flying across the sea. The shark swims fast coming at William hard.

"Alright here goes" William thinks. William moves left of the shark and hops on its back and cuts its fin off.

The shark's fin was helping it move fast, so the shark begin to slow down, now leaving it a chance open for William to kill.

"Its slowed down now's my chance" William thinks. William uses his knife and stabs the shark through the head.

The shark dies and begins to sink.

Now William has to catch the shark, so he'll have something to eat, and something to show he completed the mission.

"Oh god its dead body is sinking," says William. "Oh no you don't". William dives down and grabs the shark's body and swims back to ship with it.

"Ha you caught you a big one!" yells Roxar. Roxar lowers a net for William to get in along with his shark.

"Oh it was easy" William yells back. William puts shark in net and climes back on ship.

"Turns out, you're not so bad afterall," says Roxar.

The other vikings climb back on the ship, and some have no sharks or their sharks are small.

"People seem to underestimate me a lot," says William.

"Hmm, well I don't think anyone will anymore!" yells Roxar hitting William on the back playfully.

"Anyway where is our destination" Says William.

"We're going to an island to settle," says Roxar.

Retrieved from "https://erol.fandom.com/wiki/Role_Play:_Odin%27s_Island?oldid=5405"
Community content is available under CC-BY-SA unless otherwise noted.