Jake now being officially a Knight,by joining the Knight class from graduating from the Academy of Knight Training had been walking to the Knight HQ, just about to cross the gate, when a lady confronted him pointing her sword at him. 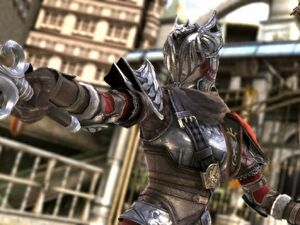 "Greetings there young knight!" she exclaims. "Welcome to the Knight Class. State thou name!"

Jake looks at the women with pride, and says "I am Jake Demo. I have recently graduated from the Academy of Knight Training. I wish to be a knight."

"Well obviously you are already a knight, if you are here," says the lady. "Let me introduce myself. I am Roselyn Griffith the leader of the knights. It is a pleasure to meet you young knight. Are you ready to complete your duties as a knight immediately?"

Jake nods and says in an assured tone "Yes. I am ready to complete my duties."

"Well since you are new to the knight class, your rank is Guard," says Roselyn in a content tone. "Your first mission is to patrol Owensberg, which is the name of this city, and keep the crime in check, guarding the civilians."

Jake notices he has many ways to explore to patrol. He can do his patrol on the stairs, the water, the bridges, or on top of the buildings. The choice is up to him.

Jake thinks for a moment and finally makes up his mind. He chooses to patrol on top of the buildings, to get a good view of the city and have a huge area that his eyes can reach for criminal activity. He speaks to Roselyn, "I will do exactly that. And by the way, what are these ranks and how do I earn them?"

"You dare join the Knight class, and not know about the ranks?" asks Roselyn in surprise. "Ranks are the ranks of the specific class you are in, and you earn them by doing certain things, which are different depending on the rank itself. If you wish to see the ranks, you can go inside the Knight HQ which is just behind this gate." Roselyn points to the gate behind her.

Jake slowly walks toward the gate and enters what's inside. He looks at what he finds.

Jake sees the HQ full of people with a person at a desk that looks like she helps people.

Jake looks at her confusingly. He asks the woman "Who are you?"

Everyone looks at Jake crazy.

"Isn't it obvious?" asks the lady with a smile. "I'm an employee here to help you."

Jake fixs his face with facial expressions. He looks serious. He looks at the lady and says in a calm manner "What are the ranks for Knight?"

The lady lightly facepalms herself so she doesn't seem rude. "You joined the Knight class without knowing the ranks?" she asks in worry.

Jake becomes more and more annoyed as people question him. He holds his anger back and without yelling he seemingly calm says to the women, "Just tell me the ranks already!"

The lady hands Jake a paper that says the ranks of the Knight class.

Jake grabs the paper and reads what it says. Jake said in his mind, slowly after reading each rank, "Guard..Dragoon....Slayer....." Jake reads on whatever was on the paper, until the only thing that has been left to read was Honorary Legend. He nods at the lady and slowly walked out. He walks to the leader of the knight. "Finally, now I am ready to pursue my duties as a knight. And I also wish to rise above the ranks and someday become an Honorary Legend. That's my new dream." he says with pride.

As Jake looks forward, he notices the leader is gone.

Jake sighs and walks out. He puts on his armor as quick as he can and prepares his sword. "I will someday, rise above others, rise above the ranks, and I will become the strongest knight alive!" He wonders how will he get up to the top of buildings to patrol. He figures out a perfect idea. He walks toward another building, climbs the stairs and eventually gets to the top floor. He starts patrolling the city there.

As Jake is patrolling, he sees no criminal activity yet. He notices that he is inside a library.

Jake sighs and wonders, "Well, if I'm in a library might as well just read some knight books, legendary encounters......nah.."

As Jake is wondering, he notices something in the corner of his eye that catches his attention. It's his choice to ignore it, or look closer.

He walks over to it and tries to look closer.

As Jake walks closer he is stopped by the window. As he looks closer, he notices that what he sees is a dead person on a wall with blood splattered around him.

Jake is disgusted by what he sees. "Who did this?!" he shouts. He begins to investigate closely.

Jake hears a bunch of "shhh" sounds since it was the library. No one from outside heard him, since he was behind giant glass windows.

Jake decides to take this into his own hands. He begins to investigate it even more closely. He then decides to walk out of the building, investigating people closely, trying to find anyone suspicious, anyone who would be a suspect. He then remembers to patrol from a top of a building so he starts to climb a building with all his strength.

As Jake climbs, he sees a hooded man running in the distance on a rooftop. The man is running unusually fast.

Jake reaches the top and notices the man. He stares at the guy saying "weird.."

The guy gets farther, and farther as the blood of the murder scene drips down the building. There, stands a crowd starring at the horrifying site, wondering who did this. Other Knight class, guards soon arrive to see the issue.

Jake follows the guy as he parkours off buildings to buildings, chasing after him.

A normal human would, fall due to the heavy army, but because of Jake's enhanced strength, it allows him to do so. Even so the target is so far ahead, that Jake fails to catch him, and the target disappears in the distance.

Retrieved from "https://erol.fandom.com/wiki/Role_Play:_Owensberg?oldid=5498"
Community content is available under CC-BY-SA unless otherwise noted.