It was the next day, and Jason Gavin was sleeping on his web. Ryan Strange then used a gadget that disintegrated the web and Jason is sent falling into the city, while the helicopter flies off. 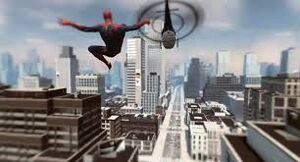 Jason wakes up and realizes he's falling, and he finds this a time for some comic relief. "BECAUSE I'M FREEEEEEEEEEEEEE, FREEEEEE FALLINNNN," Jason sings. He then swings his web in the direction of the sun and decides to wing around a little.

Just as Jason is swinging, he hears a voice that sounds like Ryan talking to him. "Alright, follow wherever the device on your wrist points it's laser to," says the voice.

"Wait what?" Jason asks. "The thing on my wrists doesn't shoot lasers, it shoots webs."

Jason notices he has a new item on his wrist. It is appears like a ninja contact device, that he has seen before in the Ninja Academy. Jason sees it is shooting a laser to the right.

"So go towards the direction of the laser!" exclaims the voice.

Jason swings in the direction of the laser.

Just as Jason swings in the direction of the laser, the laser points to a window in a building and Jason crashes through falling through a wall, to where he sees a scientist. 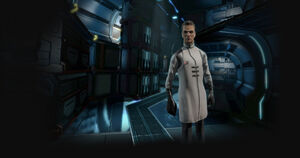 "You have no business here!" exclaims the scientist in anger.

"You have no business IN YOUR FACE!" Jason yells. "...That sounded alot better in my head.."

"There goes your target," says the voice. "Get him!"

The scientist hears the voice and begins running down the hallway.

The scientist sounds the alarm and security defense systems start popping out of the wall. Looks like Jason is going to have to go another way. There are vents on the floor, a small empty path way on top, and boxes he can maybe move in to hide?

The pathway is small and forces Jason to crawl. Now due to the high packed security, Jason has to use his stealth training from the Ninja Academy and fit his role as a spy.

Jason crawls ever so slowly to avoid being seen.

A hologram appears on the device of Jason's wrist. It is Ryan Strange.

"Hello," says Ryan Strange. "The scientist is moving fast, so you need to move faster. I know it's hard to crawl fast without making noise so I have decided to teach you a new move. This move is called the Ninja Roll." Ryan demonstrates the ninja roll through the program by pushing the surface with his hands and tucking his body moving forward. "If you want to do it consecutively; you use the momentum of your roll to keep pushing you forward. Well that's all." The hologram disappears.

"Umm okay..." Jason says as he pushes his hands down and moves forward.

"Great, you learned the ninja roll," says the voice. "Now do it consecutively to catch up to the scientist!"

While Jason does the Ninja Roll, he notices that the laser goes down showing that the scientist went downwards. The pathway Jason was on did not end anytime soon, so Jason had to find a way to get out.

"Hmm, come on Jason use that master brain of yours!" Jason says. He decided to look under the Pathway.

"Okay then, Is there a way to bust out of here?" Jason says to himself as he keeps on going along the pathway.

As Jason keeps going on the pathway he still sees no end to the pathway. He has to think faster or the scientist will get away!

"GRAH!!!!!" Jason yells as he kicks the pathway walls. "Screw this I'm going back the way I came!" Jason yells.

Just as Jason kicks the pathway walls, the walls get a dent from his kick.

The wall breaks and there's a hole. Through the hole, Jason sees an office.

Jason Jumps out the hole and looks at the office.

Just as Jason looks at the office, he sees a window which showed the view of the city. He sees chairs and tables with papers and plants.

"Hmm, I should head after that scientist" Jason says, running downward.

Jason fails at running downward as their is a floor under him. He falls and gets injured.

"Wow.." Jason says to himself and he starts running to where he thinks the Scientist went, which is downstairs.

As Jason runs, he sees a door in the office, which can lead to outside of it into the rest of the building, or something else.

Jason decides to keep going. "I'll come back to that later." He says to himself "Now I just need to focus on finding that scientist."

Jason runs into the wall because he is still in the office.

Jason goes and opens the door.

Just as Jason opens the door, he sees the pathway that the scientist was running on.

"JACKPOT!" Jason says to himself as he runs down the pathway the scientist was on.

Before Jason can run, he has to decide which way will he run. Will he run the way that he started from, or go the way he was originally going in the top path way?

Jason decided to take the path he started from.

Just as Jason takes the path he started from, he sees the stairs that the scientist went down. But now the laser on his wrist device slowly fades away, showing the scientist got away.

"He gotten away..." says the voice. "I understand with it being your first real mission..."

"DAMMIT!" Jason yells "IF I WOULD'VE BROKEN OUT OF THAT PATHWAY SOONER!"

"Well, I guess you can leave the building now," says the voice. "I suggest you should too, because something is about to happen."

"Okay" Jason says. He ran back to the office and opened the window, "What's about to happen?"

"You'll turn into a lizardman," says the voice. "Now hurry up!"

"Very Funny." Jason says hopping out the window and swinging away and doing a few air tricks.

As Jason tries to swing away, he fails, because he has nothing to swing on and he ends up falling. Luckily the helicopter was outside the building and Ryan catches Jason pulling him inside.

"Thanks," Jason says riding in the helicopter.

Jason sees a big cloud of green smoke come from the building he was just in. As he looks from the helicopter he sees people turning into Lizardmen.

Jason sits there in silence and he asks Ryan "Hey do you have any clothes I can wear besides these?"

"I'm a ninja, why would I have extra clothes besides ninja clothes," says Ryan. "I wonder where to head to next..."

"Well do you know someone who does?" Jason says. "These things are getting itchy".

The helicopter starts flying out of Xerious City.

Kaze arrives in the middle of a street in Xerious City, in which he sees lizard people inside cars and lizard people walking on the street. They look at him and begin to surround him.

"We will sacrifice you to Reptilia the God," says the lizard people in synch.

Kaze pulls his pistols, and loads them up. "Get back to your daily lives, you green tit BITCHES!" Kaze yells as he threatens to start firing.

The Lizard people start backing up, then charge at Kaze, attempting to do their own version of a dog pile, called a lizard pile.

Kaze uses his acrobatics to force himself into the air avoiding the pile. He climbs up a street pole and jumps to a building. He begins free-running on the building tops, "patrolling".

As Kaze "patrols", he sees Lizard people running everywhere with green smoke in everywhere. Xerious City has totally changed and now it is free of laws, with no one in control, with the only goal to worship Reptilia.

Kaze ignores it, certain that he would see more later. He goes through an open window in which leads to a dark home. He creeps around.

A family of Lizard people live in there and fiercely charge at Kaze.

Kaze hops out the window and free-runs away. "HEHE!" Kaze uncontrollably chuckles as he runs.

As Kaze he runs, he sees Lizard people getting on a boat to leave Xerious City.

Kaze then jumps off and lands into the water, he pulls himself on to the tip of the boat and has his guns aimed. "Going somewhere, green tits?" He asks.

The Lizard people continue to drive the boat ignoring Kaze.

Kaze kicks the driver in the jaw, and begins firing crazily.

As Kaze begins firing, they begin to fall. But they are not dead and their bullet wounds begin regenerating.

"The hell?" Kaze thinks as he begins kicking and firing at the same time.

Kaze's kicking slows the regeneration down but it makes it look more nasty, with the insides all showing and the green scales that are mushed.

"THE LOOK OF DEATH! EXCITING" Kaze says, continuing his barrage.

The Lizard people are then shut up so much, to where they are into pieces, steaming with green smoke.

Kaze pulls out a high quality camera and takes a picture. "I should find someone to put this on a billboard to get the word out to the green scaled bitches," Kaze says.

Kaze is now left on the boat with a bunch of green chunks from Lizard People. Kaze now begins to feel hungry.

Kaze now gets into the driver seat and begins driving to shore. "I sure am hungry..." Kaze says as he rubs his lips. He had some of the lizard parts on his hands and it gets in his mouth. He thinks that it is pretty good. He then eats a chunk. He eats it like beef jerkey.

Kaze arrives to shore and is back at the dock of Xerious City.

Kaze grabs like 5 chunks of Lizard meat and places it in his suit. He hops off, and walks through the city, guns drawn. He looks for someone to make a billboard.

Kaze just sees Lizard people strolling the street. He sees one lizard guy breaking a bike in half, a lizard guy doing construction on a building, and a lizard couple kissing.

Kaze walks to the construction man. "Hello. Can you do a billboard for me? I have plans to dominate this city." Kaze says comical and with a smile.

"I'm busy changing this building, for our god Reptilia!" yells the man. "You're not a Lizardman. Looks like I'll have to sacrifice you to her!"

The Lizardman drops down from his wire and takes himself off the harness charging towards Kaze with his claws out.

Retrieved from "https://erol.fandom.com/wiki/Role_Play:_Xerious_City?oldid=5434"
Community content is available under CC-BY-SA unless otherwise noted.