The helicopter arrived on an island unknown to Jason Gavin.

"Well, we're here," says Ryan Strange. "This is our location. Judging by the actions of that mission; you need training."

Jason jumps out of the Helicopter and looks around. "What is this place?" Jason asks.

Ryan jumps out of the helicopter and helicopter flies away. "This is Zodiac Island," says Ryan.

"Zodiac Island is the Ninja HQ," says Ryan. "And can you guess what we are here for?"

"Oh so we're gonna train," Jason says. "What are we gonna do? Like fight with some swords and Shurikens and stuff?" 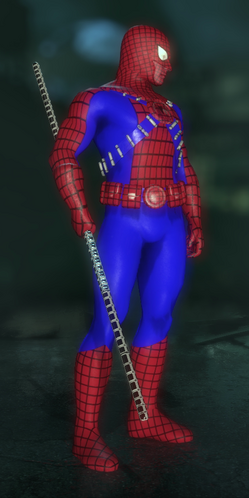 Ryan transforms into his own version of Jason, fitting his equipment.

"For this training exercise, I want you to use your brains," says Ryan. "Remember your skills to use them against yourself. Because it's sad if you can't defeat yourself."

Ryan charges at Jason spinning his staff at rapid speeds.

"WOAH!" Jason yells, he tries to do multiple backflips to dodge Ryan's staff.

Ryan sticks his staff into the ground flipping off it and coming down with a hard kick towards Jason.

Jason jumps up to try and avoid the kick.

Ryan releases a sticky substance into the air that pulls Jason back down. "You're still not using your head," says Ryan.

"Hmph" Jason says to himself. Jason shoots a web in Ryan's face to blind him.

Ryan is blinded, and Jason has an opening for a direct attack.

Jason pulls Ryan over with his webs and Unleashes a flurry of Punches.

Before Jason can release a flurry of punches, Ryan counters and reverses the attack sending Jason flying into the fence.

Jason Shoots and swings on a web before he crashes into the fence.

"You aren't getting the point of the training are you?" asks Ryan in an annoyed voice. "I said use your brain and think of your skills!" Ryan picks up his staff and gets back in a fighting position.

"UGH WHAT THE HELL DO YOU WANT ME TO DO?!" Jason Yells.

"You really aren't bright, are you?" asks Ryan. "In the pathway at Xerious City, it took you to accidentally hit the wall to use your skill. This training is to teach you to always remember your skills and think! Ryan pushes his staff into Jason's stomach hard.

Jason grabs the staff before it could go into his stomach and Drives it into Ryan's.

Ryan leans back using the momentum of Jason's attack to flip Jason over sending him flying at the fence again.

"You really don't have any fighting skill, do you?" asks Ryan.

"You don't really know how to be polite do you?" Asks Jason. Jason swings to Ryan and does a swinging kick.

Ryan pops off his arms backwards, stretching his legs out to kick Jason straight in the private part. Due to the speed Jason is swinging at, the kick instantly connects making Jason fall to the floor.

While Jason is on the floor he sweeps his leg under Ryan's legs.

Ryan jumps over the sweep kick, landing in a standing position over Jason. Ryan puts his staff to Jason's neck.

Ryan turns around and walks away, then hopping over the fence disappearing and leaving Jason there injured and hungry.

Retrieved from "https://erol.fandom.com/wiki/Role_Play:_Zodiac_Island?oldid=5477"
Community content is available under CC-BY-SA unless otherwise noted.