Death Scythe: The Death Scythe is a powerful scythe created by Shi Senshi's father and given to him as a gift. It is made of steel and infused with magic to enhance it's cutting power, durability, and accuracy.

Death's Eye: The Death's Eye is a magical yellow eye implanted in Shi Senshi's eye socket to allow him to see spirits, souls, and ghost. It even allows him to see the souls of others while they're still alive. 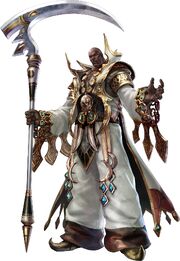 Garb of the Frozen Moon Kingdom: Garb of the Frozen Moon Kingdom is an ancient garb that was worn by the leader of the ancient Moon Kingdom. The Moon Kingdom is now frozen but the suit remained, which was given to Shi by Mistery. The garb itself has extreme resistance to cold, meaning cold weather and cold attacks are useless. There are ice crystals on the equipment that absorb the cold weather and turn it into Mana to power the user.
Retrieved from "https://erol.fandom.com/wiki/Shi_Senshi/Inventory?oldid=5028"
Community content is available under CC-BY-SA unless otherwise noted.