Stryder Hayabusa is a highly advanced ninja from a futuristic city. He is currently a C-class Strider (the lowest class). A Strider is a cyber ninja who grew up using technology. 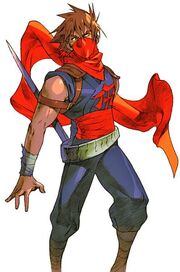 Stryder wears a bluish colored sleeveless Strider uniform resembling the clothing worn by ninjas in popular media that shows the kanji for the first character of his codename (飛 - Hi) imprinted in red on the upper left of his chest. Sometimes he is seen wearing a red scarf that he uses to mask the lower portion of his face.

Styder is a very serious person. He does not like what most people consider "fun." People who know him often call him boring because his serious attitude. He does not kid around nor does he take lightly to jokes. Him not taking lightly to jokes is also because of his anger. He is always angry for some reason.

High Agility and Speed: Stryder is able to move his body parts at very quick movements. This helps him to be able to strike opponents fast. Stryder is also face being able to move at sonic speeds.

Enhanced Strength: Stryder's strength is impressive. His strength gives him the ability to break people's limbs with his bare hands.

Low Durability: Being a very slim individual Stryder's durability is low and can take damage easily.

Average Durability: Stryder has the durability of an average person and can fight for a regular amount of time with the same energy.

Enhanced Intelligence: Growing up around technology, Stryder is very intelligent being able to solve science and mathematical equations.

Low Mana: Stryder has a low amount of Mana.

Average Mana Pressure: The amount of pressure Stryder's Mana gives off is normal and nothing special.

Retrieved from "https://erol.fandom.com/wiki/Stryder_Hayabusa?oldid=4656"
Community content is available under CC-BY-SA unless otherwise noted.