Welkin Gunther is a Gallian Gunman, a standard recon-based one, at that. 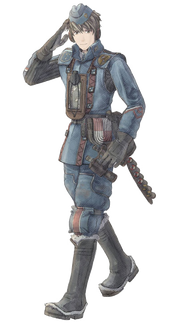 Welkin is a pale skinned man with grey hair, having a light blue uniform hat sitting on top of it along with a basic radio headset. He wears light blue basic armor that is his uniform and also light in weight, only very somewhat resistant to weapons, be it slashing, impact, or bullets. On his feet are black boots with fur inside to keep his legs warm which are also resistant against cold attacks. Due to his light uniform there is very little weighing him down, allowing him to move farther than people with heavier armor or weapons.

Welkin is normally friendly and treats people kind and caring, although strict when his position in a situation is questioned. When this happens a different side of Welkin is shown where he is very eager to prove the person he's against wrong.

High Speed:Welkin was trained as a reconnaisse soldier, thus was to quickly get in, scout any defenses, and report back as soon as possible. Thus he's able to move much farther than most.

Enhanced Endurance:Since Welkin was to be a reconnaisse soldier, he was also to be able to scout deep into enemy territory without having to stop and risk detection.

Average Durability:Welkin is a ordinary human, and thus has the same durability than any other one. Thus, he relies moreso on armor for protection.

High Intelligence:Welkin knows a large amount of topics, ranging from animals, the workings of weapons, or nature in general. His knowledge also helps him in reconnaisse, being able to recognize foot-prints, and quickly tell them apart.

Average Mana:Although Welkin is a regular human, he can quickly inspire people for battle, much more than even the arrival of a general or such, and can even boost the abilities of others.

Average Mana Pressure:Technically, Welkin's mana pressure can vary greatly, increasing based on the tactical areas of battle. So if he believes he can win, it's better than average. But if he has few hopes for winning, it's low.

Retrieved from "https://erol.fandom.com/wiki/Welkin_Gunther?oldid=4260"
Community content is available under CC-BY-SA unless otherwise noted.